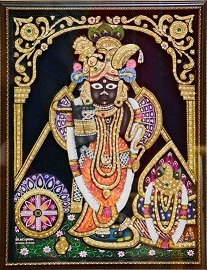 Swami Haridas was the reincarnation of Lalita ‘sakhi’ (female friend), of the inner consortium of Lord Krishna. This easily explains the fact that even in his childhood, he was more into meditation and scriptures, while other children of his age were busy playing. He was married at the suitable age according to the time to Harimati. 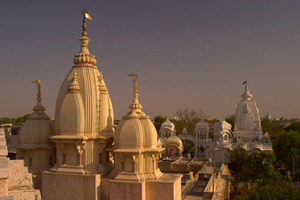 The very well-known ISCON Temple is a must visit while in Vrindavan. Dedicated to Lord Sri Krishna the ISCON Temple belongs to the International Society for Krishna Consciousness (ISCON) and was established personally by AC Bhaktivedanta Swami Prabhupada, founder ISCON, in 1975. The temple is dedicated to both Lord Krishna and his brother Balaram.

Also known as Sri Krishna Balaram Mandir, the ISCON Temple is situated in Raman Reti, which is believed to be the place where Lord Sri Krishna spent the younger years of his life on earth. It is believed that Lord Krishna along with his brother Balaram used to herd their cows at Raman Reti near the Yamuna River. 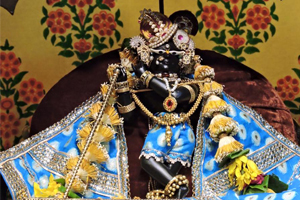 Radha Raman means the lover (ramana) of Srimati Radha. The temple was established over 500 years ago by Gopala Bhatta Goswami. At the age of thirty, Gopala Bhatta Gosvami came to Vrindavana. 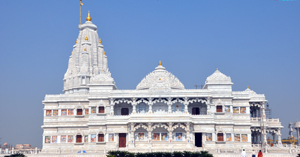 Prem Mandir is a religious and spiritual complex situated on a 54-acre site on the outskirts of Vrindavan, Mathura, India. It is dedicated to Shri Krishna. The temple structure was established by Fifth Jagadguru Shri Kripalu Ji Maharaj Kripalu Maharaj.

The foundation stone of Prem Mandir was laid on January 2001 by Shri Kripalu Ji Maharaj Kripalu Maharaj and the inauguration ceremony took place from 15 February to 17 February 2012. The temple was opened to public on 17 February. 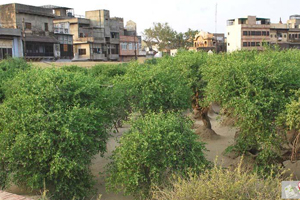 Nidhivan is one of the most significant and popular temples of Vrindavan. It is termed as MADHUVAN also. Swami Haridasa, a divine saint who was the very cause of appearance (advent) or PRAKATTYA of Lord BANKEY BIHARI at this renowned Nidhivana, used to please his PRIYA- PRIYATAM.

Lord (Thakur) Bankey Bihari by pouring the melodious rapture of his thrilling music in the periphery of this spiritual temple. It is surrounded with the small-sized trees. So to say, it is a spiritually blessed temple where spontaneous overflow of devotion and penance flows every time. 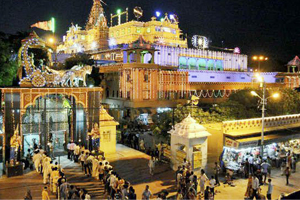 Mathura, the birth city of Krishna is situated on the banks of river Yamuna and is approximately 145 km from the capital city Delhi. The town is renowned for being host to the most revered temple of Shri Krishna-the famous Krishna Janma Bhoomi Mandir.

The temple is the place where lord is said to have been born thousands of years ago. Along with neighboring towns Govardhan, Nandgaon and Vrindavan, the area is a major pilgrimage site for Hindus.The temple is located in the middle of the city mathura. 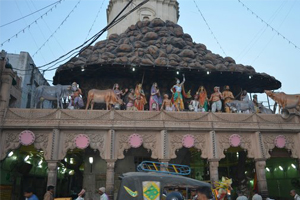 Govardhan also called to Giriraj mountain descended its name from the Holy Goverdhan Hill. It extends upto 4 or 5 miles and has many sacred sites.

Lord Sri Krishna is associated with several religious places in Mathura and Vrindavan. It is said that Lord Krishna held Govardhan Hill on his little finger to save the town from wrath of the god of rains Indra. There are many temples in this town Haridev Mandir, Daan-Ghati Mandir and Mukharbind. The town is also famous for its 21 kilometre long Parikrama of the very old hill called Govardhan. The parikrama procession is held in very high religious belief. 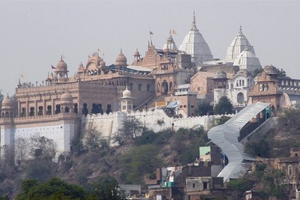 The Barsana temple is located on top of a hill which is a part of a small ridge composed of four hills. These hills are revered in the local legends as either the four heads of the god Brahma, or the three largest peaks as a form of trinity. Man Mandir is located atop another hill. The temples have a relatively recent construction and are dated to 18th century.

The hill is verdant and is known as Ghevarvan. Rasalila is organised by several local saints in which local children become Radha and Krishna along with male and female companions dressed in wonderful garments and looking like real gods.